Petralia Sottana is around the Norman castle walls. XIV century papers already described it as Petralia Inferior to distinguish it from Petralia Superior (Soprana).
The Church of Saint Maria della Fontana is to be found in Corso Pietro Agliata. It boasts a Catalan-Gothic porch and houses prized statues of the Gagini school. Further along is the former Monastery of the Brothers Minori, which is now a cultural centre, and the much admired baroque Church of Saint Francis with its XVII century frescos, valued paintings and sculptures, including the carved pulpit which is decorated with gold-leaf.
The XVII/XVIII century mother church, which is dedicated to the Assumption of the Madonna and has a XIII century Catalan-Gothic porch, looks over Piazza Duomo. Passing below the bell-tower of the mother church along Via Duomo one reaches the Church of the Trinity with its XV century porch on the front elevation.
On the first Sunday after “Ferragosto” Petralia Sottana plays host to the ballet pantomime of the Cordella with its traditional costume wedding procession. 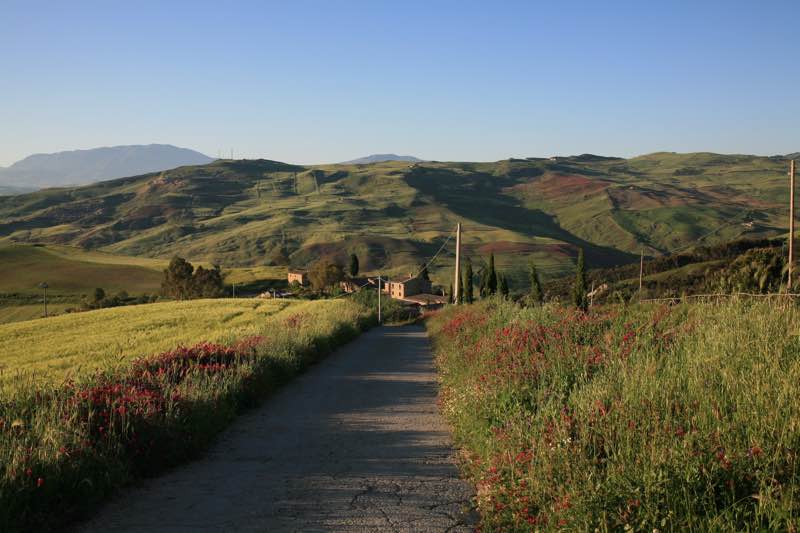 Petralia Soprana is the highest town in the Province of Palermo, situated 1147 metres above sea level. Possibly of Greek or Sikan origin, the town is certainly recorded as Petra from the third century A.D. It was an impregnable fortress in the Arab period when it was occupied by Christians and Muslims side by side. Under the Normans it retained its strategic ro1e and adopted its modern name of Petralia.The beginning of the historic town is marked by the arch of the Seri Gate and the remains of the ancient defensive walls.

On Corso Umberto there is the neogothic former Carmelite Monastery which now serves as the Town Hall. The mother church of the Apostles Peter and Paul, situated in Piazza Duomo, was rebuilt in XIV century and altered during the 1700s. It has a baroque portico with paired columns below which is a Catalan-Gothic porch which dates from 1400. It contains statues by Antonello Gagini and Giorgio da Milano and a crucifix by Brother Umile of Petralia. Also worth a visit is the XVI Church of Saint Salvatore with its mighty dome and, inside, an icon of the Gagini school from the 1400s. Across Piazza San Michele is the Church of Saint Maria di Loreto which, in addition to several prized sculptures, has a fascinating sacresty with frescoed ceiling and walls. Petralia is a tourist attraction and holiday location. Its position high on a rocky outcrop in the heart of the Madonie allows it to dominate the countryside around and this location and the town’s cultural wealth make the pleasure of a visit almost a duty to oneself.

Archaeological excavations not only show that this area is the site of the ancient Sicula town of Engyon but there were also Roman and medieval settlements in the area of Gangivecchio (Old Gangi). The old city was destroyed by Federico II in 1299 and the new area began to be developed around the castle built by the local Lord, Francesco Ventimiglia in the fourteenth century.
At the entrance to the historical part of the town there is a round tower, said to be of Saracen origin, from which the road climbs up Mount Marone and enters the town, becoming Corso Umberto I. It passes the XVI century Palazzo Bongiorno-Li Destri, now the municipal offices, and goes on into Piazza del Popolo. Here is the mother church which dates from XVIII century, although its square bell-tower was built by Ventimiglia.
The exterior is decorated with interesting stucco-work of this period. The church houses “Il Giudizio Universale”, the most famous work of the artist Giuseppe Salerno, who was nick-named “lo Zoppo di Gangi” (the Cripple of Gangi). There are also various beautiful statues including a cherubin by the local XVIII century sculptor, Filippo Quattrocchi.
Preserved in the Church of Saint Salvatore are a wonderful crucifix by Brother Umile of Petralia and a canvas attributed to the Cripple of Gangi.

Climbing up to the ancient castle it is possible to see what remains of Francesco Ventimiglia’s manor house, now private property. In the days before “Ferragosto” (the Italian public summer holiday on 15th August, which is in fact the religious festival of the Assumption of the Virgin Mary, something that most Italians seem to have forgotten) there is the Festival of the “Spiga” (ear of corn) with its evocative costume procession, twisting and turning, and ancient vehicles without wheels. 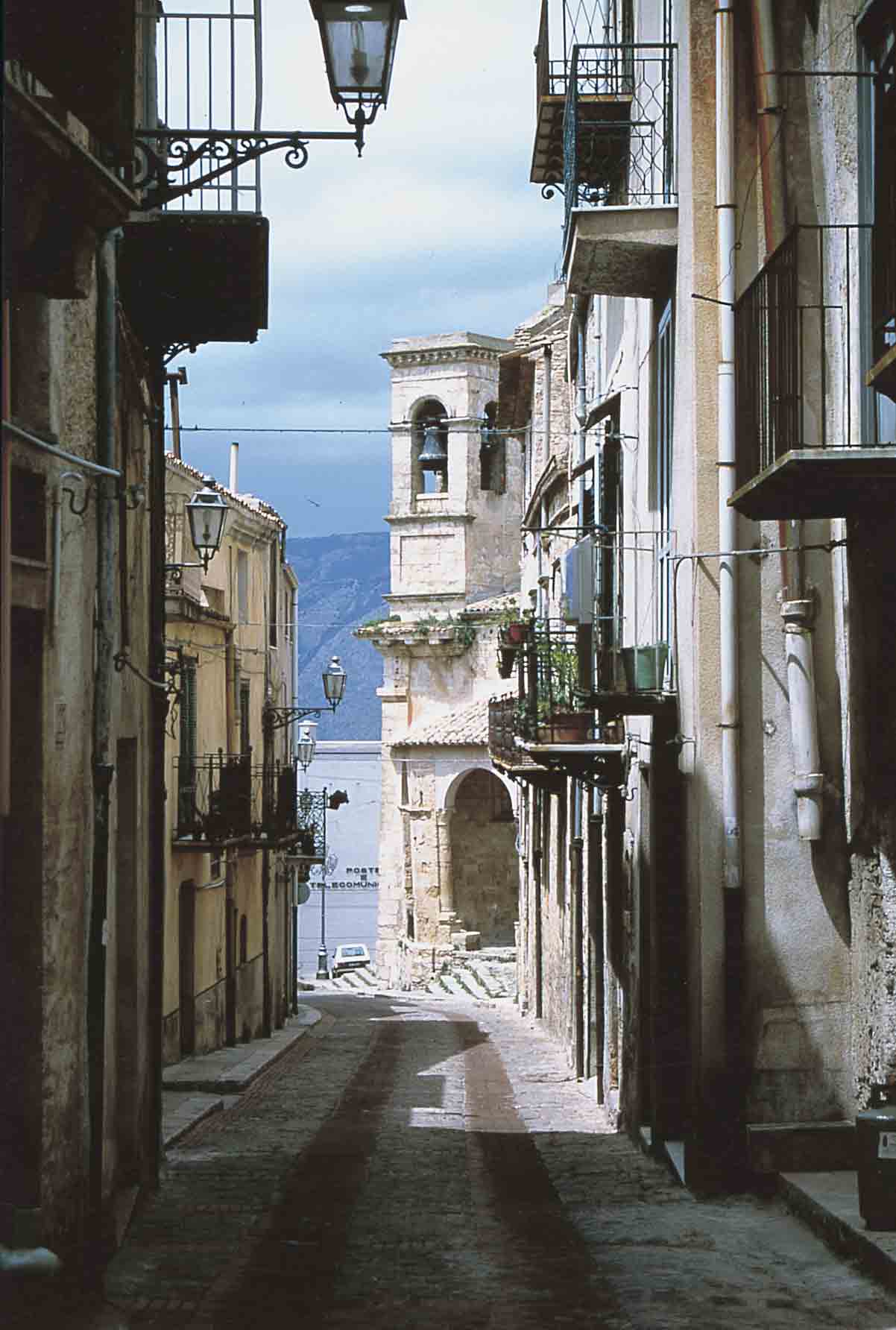 the town has developed around the castle built on the instructions of Ruggero I (The Norman King Roger I) in 1076, probably on the site of the medieval town. Federico II granted the town many privileges and added the title “Generosa” (abundant, generous) to its name, perhaps because it was a rich, populous centre. In the former Piano della Bayota, now renamed after the illustrious local writer, Antonio Borgese, are the XVI century Church of Saint Salvatore, the XV century former Domenican Monastery and the Church of the Trinità dei Cavalieri Teutonici (Trinity or Teutonic Knights). On Via Garibaldi there is the Palazzo dei Rampolla, the home of the aristocratic family of the area and, further along, the Town Hall which occupies the former Jesuit boarding school. Then there is the piazza of the mother church which was built at the end of XVII century on the site of an earlier church. Inside there are the “Madonna del Rosario” by Giuseppe Salerno, a piece of the Sarcophagus of Saint Gandolfo, who died here in XIII century, and a bas-relief of the Last Supper, both works of Domenico Gagini. The famous winter tourist centre of Piano Battaglia can be easily reached from here, one of the main centres of the Madonie park.